For years the Blue Yeti has been referred to as the best USB microphone from many different bloggers, podcasters, and YouTubers, and it has a nearly perfect 5-star rating almost anywhere you look.

The Blue Yeti is currently $129 on Amazon, but some colors are cheaper than others. Blue Yeti is made of a sturdy metal and stands almost a foot tall & weighs about 3.5 lbs. It comes with a USB cable and is compatible with Mac and PC right out of the box. No drivers or software needed. Just plug it in and start recording. Even though the Yeti can fold down to make it a little better for storing or packing, it’s still mainly designed to stay put on your desk because of its fairly large size and solid build.

At its price range the Blue Yeti is the best choice for most people. If you look at mics below $100 you’ll see they often lack a key feature that the Blue Yeti has, and if you want something that sounds better than the Blue Yeti you’ll most likely spend a lot more money on a complicated setup of an XLR mic with a separate audio interface. The advantages of having a USB mic like the Yeti are USB mics are cheaper & simpler. The Blue Yeti has an internal preamp and analog-to-digital converter that takes the incoming signal, amplifies it, and converts it to digital, and sends it directly into your computer. That means you don’t need any other gear to start recording.

The headphones jack allows latency-free real-time monitoring of your microphone so you can make sure your recording levels are just right and you’re not peaking. There’s also a standard thread mount for attaching the Yeti to a different mic stand or boom pole. The bottom of the mic stand has firm foam on it that allows the mic to stay in one place really well. Under the mesh top there are actually three condenser microphone capsules which make the Yeti versatile for almost any recording situation. It has a pattern selector where you an choose up to 4 different recording settings.

Cardioid mode records sound sources that are directly in front of the microphone, delivering a rich full bodied sound. It minimizes the pickup of noise from the sides and back of the microphone. It’s perfect for recording your voice, whether it’s a voiceover for a video, podcast, gaming commentary, singing/rapping vocals. Cardioid mode is also great for recording solo instruments.

Stereo mode uses both the left &right channels to capture a wide, realistic sound image so it’s good for when you want the listener to hear the movement from one ear to another and also ideal for recording things like acoustic guitar or a choir.

Omnidirectional mode picks up sound equally from all around the mic. It’s best used in situations when you want to capture the ambient noises and want the listener to have the feeling of “being there” like recording a band’s live performance, a multi-person podcast or a conference call.

Bidirectional mode records from both the front and rear of the microphone while the noise from the sides are not picked up. It’s good for recording a duet or a two-person interview or two-person podcast episode. It comes in handy when you don’t have multiple microphones for multiple people.

Blue Yeti records in 16-Bit 48 kHz and is perfect for voiceovers, podcasts, YouTube videos, video chats, live streams, and musicians. The Yeti just does an excellent job at capturing a voice the way it sounds in real life with clarity.

To get good audio quality:
Be sure you’re speaking into the front of the mic (not the top) when you’re in cardioid mode.
Get fairly close to the mic for it to capture that richness of your voice. If you’re super close, invest in a pop filter.
Set the correct gain level using the gain control knob. The more gain, the louder and more sensitive the mic will be.

Even though I think the Blue Yeti is the best USB mic overall because it has professional studio sound quality, very solid and attractive design, multi-pattern recordings and tri-capsule microphone array, if your budget isn’t enough for the Yeti I recommend the Audio Technica ATR2100. It’s almost half the price of the Yeti and it is one of my all time favorite USB microphones. 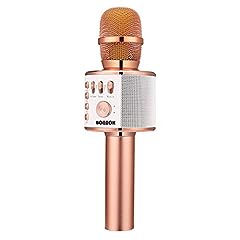 【 PARTICULAR DESIGN】 - The excellent design of our karaoke microphone is very suitable for your hand, which can make you feel more comfortable. And the built-in high-quality Bluetooth module can be used as speaker, player and Recorder, compatible wit... (as of September 22, 2020 - More infoProduct prices and availability are accurate as of the date/time indicated and are subject to change. Any price and availability information displayed on [relevant Amazon Site(s), as applicable] at the time of purchase will apply to the purchase of this product.) 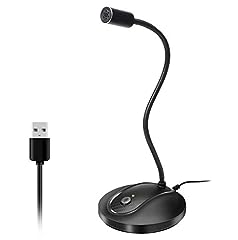 ■ 360 Degree Position Adjustable Gooseneck Design --Adopting the design of metal gooseneck pipe pickup the sound from 360-degree with high sensitivity, in the best possible location for sound to your PC gaming,dragon voice dictation,and talk to Corta... (as of September 22, 2020 - More infoProduct prices and availability are accurate as of the date/time indicated and are subject to change. Any price and availability information displayed on [relevant Amazon Site(s), as applicable] at the time of purchase will apply to the purchase of this product.) 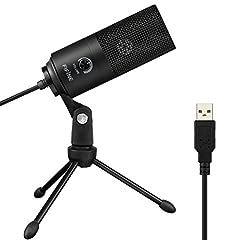 (8796)
Plug and play Usb recording microphone with 5.9-Foot USB Cable included for computer PC laptop that connects directly to USB port for record music,computer singing or podcast. Easy to use and install on Mac or PC. (◆◆Not compatible with Xbox and Phon... (as of September 22, 2020 - More infoProduct prices and availability are accurate as of the date/time indicated and are subject to change. Any price and availability information displayed on [relevant Amazon Site(s), as applicable] at the time of purchase will apply to the purchase of this product.) 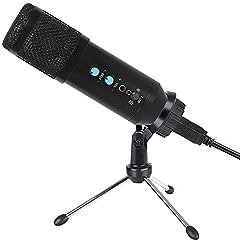 【Upgraded Functions Ever Seen】 You can adjust the volume and echo effect directly on microphone by turning knobs. You don't have to use professional software to get a better voice, but turning the knobs only. The 3.5 mm headphone jack allows you to h... (as of September 22, 2020 - More infoProduct prices and availability are accurate as of the date/time indicated and are subject to change. Any price and availability information displayed on [relevant Amazon Site(s), as applicable] at the time of purchase will apply to the purchase of this product.)

Am I able to use it to talk on Skype and in games to?

nice review, wanted to throw my Yeti, but decided to give a try again

The gain is so good, you can ear rape ur friends

Really in-depth review, but I couldn’t wait for you to stop talking about it to hear your rap. Sorry, I skipped to the end. 🙂

would this work for a 4 person podcast?

you made me want to buy this mic right away

I liked the Blue Yeti, but later I found it picked up too much unwanted noise. Now I have the SM7B.

yep, approved by a *cat*

The mic is awesome I just got one, but the rapping was off the Hook.. lol…

Hi there. I have a very simple but important question. I have been doing reaction videos on my new channel. Always by myself with a lav mic hooked up to my phone, no issue. I want to bring in guest speakers, and don’t want to tie them down with Lavs (I only have one, but would have to buy a couple more). Looking at this one, blue yeti or snowball. If I buy one of these (most likely usb version) and put it down on the table in front with omni-directional mode, will it pick up the sound of our voices clearly and crisply? Close to what my Lav does? We would be in front of a desk. Any advice for people in a room so they can speak and sit freely and still record good audio would be greatly appreciated. Or is it that we must sit in a very specific proximity to the mix, and not move very much so as to not decrease quality..

HELLO BRO.. CAN I USE IT WITH LOGITECH C930 WEB CAM???? PLEASE ANYBODY REPLY
Reply

Hi Andy, good job and a good sounding mic – but the link to the cheaper Audio Technica mic shows a different one than in your video (Audio Technica AT2020USB)

Here I use a Yeti USB mic with Garageband https://soundcloud.com/carapungo/encuentro

I was thinking about the blue yeti. This just made my decision for me. Thank you so much for this informative review. I subbed and liked because of quality content. Keep up the good work!

lol. I love the part where you go “Sweet, hot nutella”

pls sub to me

You qouted Big L so ill like the video

The things that will make buy this instead of the audio technica at2020 usb+ is the mute button and being cheaper too.

I had Blue Snow Ball and I returned it because it wasn’t as good as my old microphone Logitech, will this do the job?

that rap was 2 good

very useful video, learned a lot about the blue yeti, thank you!! Will be getting this microphone one day. Happy New Years.

Everyone is talking about the microphone and here I am, amazed by how cool and neat your computer setup is and that Himalayan Salt lamp (?). ^^ Cool review, I’ll receive mine soon. But it’s the black one.

Hi the rap was amazing thanks

i want to cringe but this guy seems nice. How do you get your yeti out of your webcam shot and maintain audio quality?

Thanks so much for this! It was super useful and so direct! 🙂

Hey, great video. Is this a sponsored review?

What if the usb cord is too short?

So for an interview or dialogue between two people, only one of these would be needed?